Touchscreen is a common interface in our daily life, for instance, when you type a message on phone, withdraw money from an ATM, or adjust the temperature of the air conditioner in the office.

Do you notice the feature differences among those touchscreen display? such as response time, required pressure and even the texture feeling on your fingers. All the differences are because the specific requirement of the terminal needs different touchscreen technology to accomplish.

Hence, it is important to adopt the right touchscreen technology in your projects or terminals. Three main components of a touch screen are touch sensor, touch controller, and driver software.

As the name implies, resistance measurement is the basis for detecting touch, and the pressure value on the screen is directly converted into an ohmic change value.

Resistive touch panels have several layers (as shown in below figure) with conductive layers of indium tin oxide (ITO) separated by spacers, which keep them from touching each other when the touchpad is not in use.

When the pen touches the panel, the space disappears by pressure, the resistance changes are detected by each layer, and the coordinates of the touch are calculated. 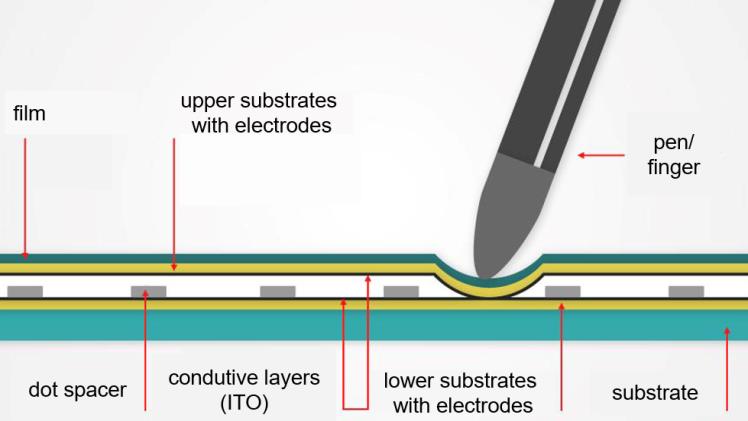 Capacitive touch technology relies on the body’s capacitance rather than pressure like resistive technology to form the capacitance change on screen.

It is normally used in larger-size screen products and requires less precision. The touch screen is covered with a thin glass surface. Under this glass surface, there is a protective layer covered with a thin layer of electrodes. The electrodes on the corners of the panel supply voltage to the thin film layer. When the finger touches the screen, a small charge is transferred to the finger and the circuit is generated, which creates a voltage drop at that spot on the screen and the touch is detected as well. That’s why you can’t use a capacitive touchscreen while wearing gloves.

Under the glass with the protective cover, there is a pattern or matrix of electrode layers. This matrix forms the plane of X and Y coordinates that the controller uses to count touch events.

Which type of touchscreen solution suits your project? 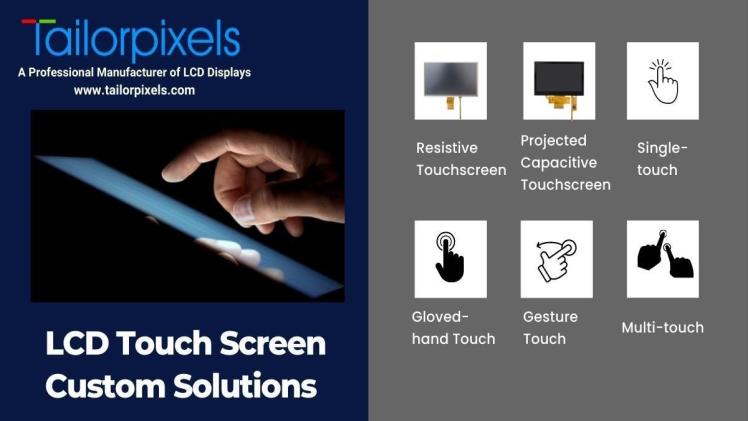 My suggestion is to initially consider the application environment and the functional requirements of your terminals.

General speaking, for many industrial instruments, the touchscreen is used on the control panel which does not need precise control of the buttons, a resistive touch panel is the better option since it can work via a gloved hand and endure the challenging environment.

However, if higher accurate control is requested in applications, capacitive touch panels are a better choice.

Multi-touch is another determining point, the resistive touchscreen is hard to accomplish such function, but it is no problem for the capacitive touchscreen.

In addition, the user experience of the capacitive screen is much better for its smooth scrolling and high sensitivity. Hence, it is popularly adopted in consumer products.